Every so often there will be something that slows a system down. There are a few tools that can help to identify which process is the cause of this slow down. One such tool is htop. Htop is an interactive and real time process monitoring application for Linux which will show you your usage per cpu/core, as well as a meaningful text graph of your memory and swap usage.

Let start by installing htop. To install htop for Ubuntu execute the following command in a terminal

Once installed, just type htop at a terminal to launch it, Here is an example of what htop looks like on my system. 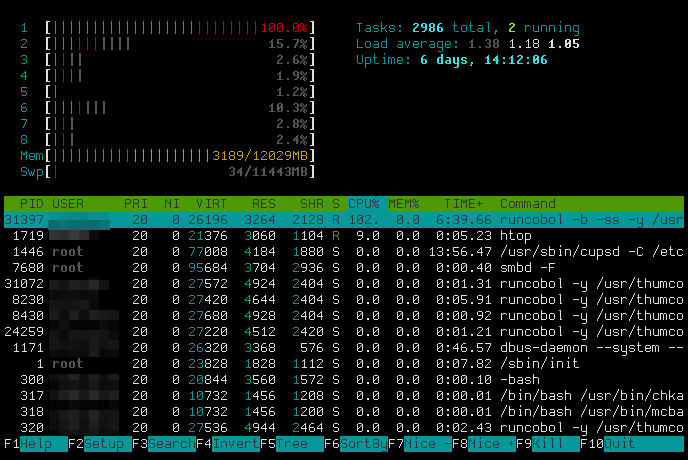 The numbers on the top left from 1 to 8 represents the number of cpu's/cores in my system with the progress bar next to them representing the load of cpu/core. As you would have noticed the progress bars can be comprised of different colors. The following list will explain what each color means.

The system load is a measure of the amount of computational work that a computer system performs. The load average represents the average system load over a period of time. 1.0 on a single core cpu represents 100% utilization. Note that loads can exceed 1.0 this just means that processes have to wait longer for the cpu. 4.0 on a quad core represents 100% utilization. Anything under a 4.0 load average for a quad-core is ok as the load is distributed over the 4 cores.

Htop will lists all the running processes on a system with information about how much cpu and memory each process is using as well as the command used to start the process.

Here is a list that explains what each column means.

The difference between VIRT, RES and SHR:

Htop has some very useful feature built-in to make one's life easier when working with system processes, here a list of feature that I find very helpful.

Another useful option in htop is the setup menu which can be accessed by pressing the 'F2' key. Here you can change the behavior of the meter bar, customize some of the htop display options, choose a color theme for the htop output and choose what columns needs to be displayed for the processes in htop.

Htop is a fantastic tool that is over looked at times. When I suspect that there is performance issues with a system, htop is one of the first tools that I use to start the investigation to what might be causing the problem. I hope someone will find this article useful and if anyone has any question leave a comment below and I will try and answer it.